A Stone Strong replacement for a failing cinder block wall halts erosion and beautifies the shoreline on Watts Bar Lake in Kingston, Tennessee

Life on a lake can be filled with simple pleasures. That’s certainly the case on Watts Bar Lake near Kingston, Tennessee. Looking out from his house on the hill above the lake, Butch Clark might spy an eagle cruising above the water in search of a meal, or he might watch as a pontoon boat chugs along the busy channel in front of his property.

Lately, he’s noticing something else, too. Bigger leisure boats designed to stir up maximum wave action for wake boarding. The churn from those wave runners sends water lapping up to the shoreline with increasing intensity. It’s an issue for some homeowners on Watts Bar Lake, but not for Clark since he replaced a crumbling cinder block sea wall with a new Stone Strong retaining wall system.

“When you live on the main channel, there’s always a problem with waves and erosion,” Clark said. “This house had an older sea wall – I’m guessing it was 45 years old – and it was falling down. Erosion was starting to eat away at the bank so you have the choice of putting in either rock or block.” 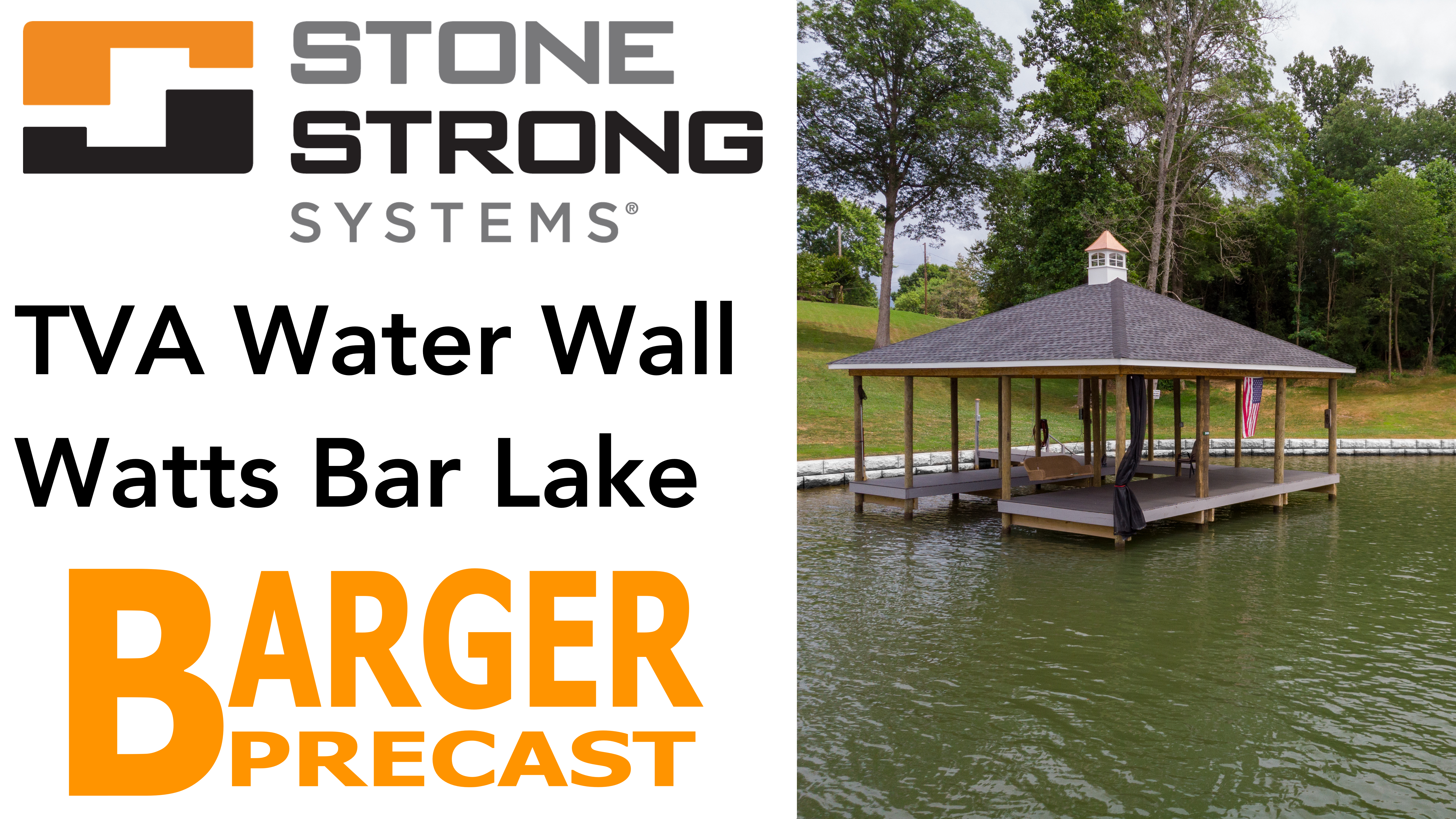 Clark chose block and went in search of a modern retaining wall system that would provide a permanent fix. A retired AT&T analyst, he did his research, and ended up at a local Roane County business, Barger Precast in Lenoir City.

“We wanted something that, once you got it in place, you were done with it. And then we wanted something that would have good resale value if we ever sold,” Clark said. He went to the right place because that’s the exact philosophy Barger Precast describes when talking about the Stone Strong retaining wall system.

“In my mind a wall is a significant expense,” said Kelly Barger, an estimator at the company who worked with the Clark family throughout the project. “It doesn’t add any square feet to your home. It doesn’t add a bedroom. It doesn’t add a bathroom. If homeowners are making this type of purchase, I want it to be a permanent solution for them, so they can sleep well and not worry about it. I want them to know it’s going to be there for their lifetime. It’s a project that they’ll never need to redo.”

TVA Legacy
Building a wall on the shore of a Tennessee Valley Authority lake is not a simple process. Considered one of the most successful enterprises of Franklin Roosevelt’s New Deal program to help lift the country out of the Great Depression, TVA provided jobs, agricultural development and electricity to Tennessee and parts of six other surrounding states. The dams constructed along the Tennessee River created picturesque manmade lakes like Watts Bar throughout the region. Watts Bar dam was completed in 1942, but TVA continues to administer the water resources, which means permits are required for projects like Stone Strong walls.

In addition to permitting, which adds several months to the timeline, there is a short window in which to install a lake wall. The wall can be built only when TVA has drawn down the water in the reservoir and the bank has had time to dry out. That typically happens over the winter.

“We’re telling homeowners to start in April, so four or five months later they will have their permit in hand,” Barger said. “We’ll know what they need for their wall and can start production, and then we’ll be ready for that short construction window from approximately end of November to February.”

That’s the way the schedule worked out for Clark. He contacted Barger Precast in the spring of 2018, which led to a visit by Barger to see the existing wall and property.

“We went out and measured,” Barger said. “The existing cinder block was just crumbling and falling in. The dirt behind it had caved in so there were big gaps between the soil and the wall. In certain places it had just toppled and fallen into the lake altogether.”

Those cinder block walls are common along Watts Bar, and they are disintegrating due to the effects of time and, possibly, the increased wave action generated by bigger boats. “These older walls have started crumbling and failing and now these homeowners are wanting to replace them for safety concerns, for aesthetic reasons, and to prevent erosion so they can maintain their shoreline,” Barger said.

Fortunately for lakefront homeowners, the Stone Strong system has the bulk and modern engineering that creates a barrier that will stand up to both water and time. The blocks used on Clark’s wall, Stone Strong’s model 6-28, feature a 6 sq. ft. face and a 28-inch depth. Each block weighs in at 950 pounds and has a hollow center, which is filled with stone during installation. The Clark’s plan specified three courses of Stone Strong running 258 feet long and 4 ½ feet high, which added up to 196 pieces manufactured at the Barger Precast plant. The blocks were produced and ready to deliver just prior to the construction window.

With the permitting done and the water level drawn back for winter, it was time for construction.
These older walls have started crumbling and failing and now these homeowners are wanting to replace them for safety concerns, for aesthetic reasons, and to prevent erosion so they can maintain their shoreline.
Kelly Barger

A Family Project
Building the wall became a family project for Butch Clark. After checking on the cost of having a contractor install the wall, Clark decided to tackle it himself with some construction savvy friends who had the right equipment, a few of their associates, and his wife Tesa and daughter Allie, who were involved in the project throughout.

The Barger team delivered the blocks, which were staged near the house on the top of the hill. Clark’s team used a Bobcat Skid-Steer to move them down the hill to the waterfront – one by one – 196 trips in all. The blocks were handed off to the excavator, who set them into place. It took the team about 10 days. Kelly Barger was on site during much of the installation to answer questions and watch the progress.

“They actually installed it in the beginning of January, so it was very cold,” Barger said. “I remember the breeze coming off the water. It was frigid down there.” Clark’s team had removed the old cinder block wall, while leaving in the nearly 260 feet of existing concrete footer. The Stone Strong wall was constructed behind the existing concrete footer, which provides extra stability and protection of the wall’s stone leveling pad.

“They were great to work with,” Clark said of the Barger team. “Kelly made sure everything was there on site. Everything was spot on. She figured it right to the block. We didn’t have any spares.”

The Stone Strong wall got its first test just a few weeks later, when flooding rains engulfed the Kingston area.

“There was a heavy rain for three or four days,” Clark said. “The water came up over the top of the wall – about a foot over the wall – and came way up into the yard. You couldn’t even see the wall. When the water went down, everything was fine.”

The Stone Strong wall was in perfect shape. The rainwater even helped settle the fresh backfill behind the wall.

Later in the year, as the boating season started again, the chiseled granite face and curving contour of the wall drew notice on the Watts Bar waterfront.

“All summer long we had people who would come by and comment on the wall,” Clark said. “We actually had boaters who came by two or three times to ask about the wall.”